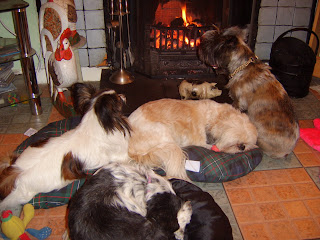 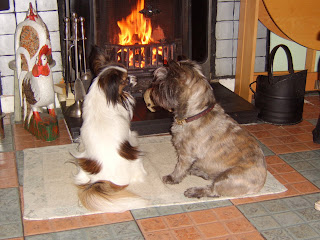 Things have been a bit miserable at home 4 of the dogs so far have the kennel cough and they are feeling a bit low.Evie the puppy was the first and so far the worse she had a bit of a time of it she coughed up so much phlegm it was scary,but thankfully she is OK now almost better.Next was Tootsie she had the cough but did not bring up so much,she was followed by Ruben he did not bring anything up just had a cough.Latest one is Leo he has a very dry cough and seem to be feeling quite low with it just wanting to lie quietly. They are all happiest lying around the fireside
Posted by Bonmeshay Show & Agility Dogs at 08:24