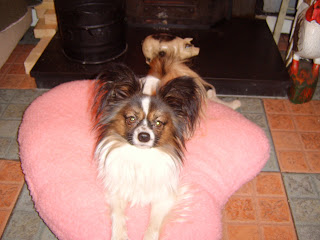 My daughter Gillian took our eldest papillon Leo (Abbeyton Sunshine Boy) to the local Scottish Kennel Club obedience heats to try there hand/paw at obedience and were also hoping to gain a place to qualify for the Final held at the SKC in August. They drew the short straw and had to go first out of the 19 dogs also there hoping to qualify, Leo being the only small dog. So off they went and started the test, Leo performed like a little star and the only mistakes made were by Gillian!! After the test they had a long wait until the other dogs performed their tests then with all the dogs finished they all done their stays together Leo behaved very well and didn't break his stays even when several dogs around him got up. So after a long night the results were finally announced and to our joy Leo took first place!!!! So now they will be practising very hard until August!!!