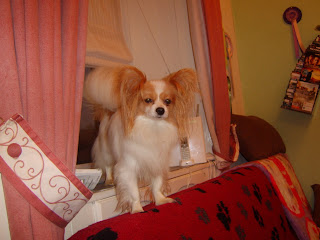 Ruben has been like a spinning top over the last couple of days we have two of the girls in season and he literally doesn't know which way to turn.But alas the girls are not for him ,well one will be but not till next year and the other is his sister so that is a big no no,but he lives in hope.He went to the LKA of Scotland show on Sunday showing was not his first priority and i must say it was like having a fire cracker at the end of the lead he strutted around looking for any obliging girls there was a pretty little bitch next to him in the ring and she flirted with him that made his day .
He went on to win his class and get Best in Breed so all was not lost.So for Ruben it was then home to gaze lovingly at the girls and dream of what could be.
Posted by Bonmeshay Show & Agility Dogs at 12:05